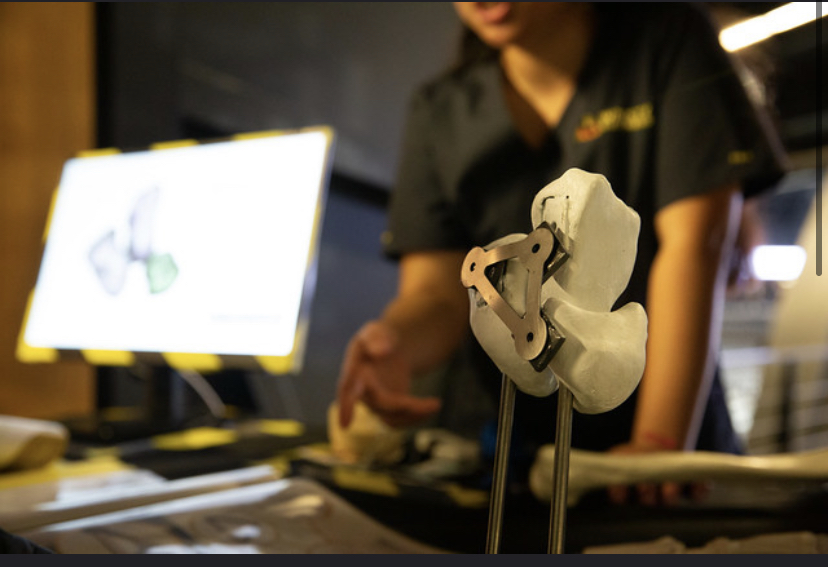 The human wrist is a complex arrangement of short, small bones, component joints and ligaments. Especially among young, active people, it is subject to approximately 20,000 instances of scapholunate ligament (SLL) tears, mostly the result of an intense impact to the hand.

Left untreated, SLL tears can degrade quickly, leading to the untreatable scapholunate collapse (SLAC) stage. From SLAC, chronic painful arthritis will develop making SLL tears responsible for 1 in 14 cases of arthritis in the wrist. The existing treatment for SLL tears, which relies on casts and orthopedic screws to stabilize bones while a surgically repaired or reconstructed ligament heals, has a 40% – 70% failure rate.

In response to Dr. Clifton Meals’ challenge to find a better solution for those suffering from SLL tears, Team Wristy Business designed the “WRISTraint” as its Fall 2022 Georgia Tech BME Capstone endeavor. 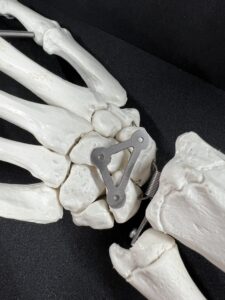 From the team’s presentation, the WRISTraint is a 26.6 mm by 14.9 mm titanium implant with a thickness of .5 mm “that holds the scaphoid, lunate and capitate in place so that the newly repaired scapholunate ligament remains still enough to heal without causing the wrist to become permanently stiff.”

“Among the project options and unmet clinical needs presented to our team, this one was particularly attractive in part due to the requirement of a combined understanding of the underlying anatomy, movement and function,” Team Wristy Business’ Adriana Staten said.

GCMI has supported BME Capstone teams for years and proudly brought our assets, facilities and team members to bear on this team’s project as well.

“The ability to clearly demonstrate WRISTraint’s ability to accomplish exactly what we hypothesized in a cadaveric model thanks to GCMI and OXOS Medical’s Micro-C imaging technology was both exciting and fulfilling for the team,” Alyssa Paul said. “We are grateful to OXOS as well as the GCMI and T3 Labs staff especially Rhonda Lynch.”

That milestone, successful demonstration of the device’s capability, would not have been nearly as meaningful if not for the groundwork required to ensure a viable commercialization pathway. That pathway demands investigation on existing patents for similar devices, or devices intended for similar applications, and, more importantly, freedom to operate. The team wisely confirmed availability of freedom to operate prior to any prototyping. Additionally, the device appears to have a very well-defined FDA Class II regulatory pathway.

With confidence in having that hurdle cleared, the real fun began. 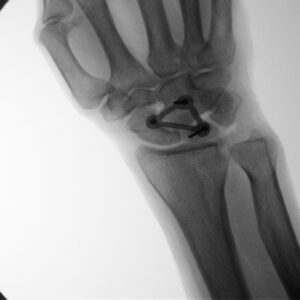 “Biomedical engineering is a highly interdisciplinary field,” Gwyneth O’Sullivan said. “We worked with professors, clinicians and experts in materials application for biomechanical issues, Dr. Scott Hollister on 3D printing applications and potential, and our advisors and clinicians to pinpoint the problem with the current standard of care, exactly what they need the device to do and create a device that they are able and eager to use.”

Early engagement with GCMI helped open the doors to the fields of experts and expertise, kept the team on a solid pathway and eliminated any need to reverse course or pivot any later than was necessary.

“Generating design inputs unique to the device having identified the shortcomings in current [solutions] with confidence in freedom to operate gave us additional confidence in our prototyping activities,” Ally said. “Our cadaveric testing with Dr. Meals identified tweaks needed to the device’s shape, attachment points or ‘holes,’ screw size, drill bits and the dimensions or specifications of the drill itself, for example. Because we followed a solid pathway, we had a lot more latitude to make positive changes that should increase the likelihood of clinical utility and positive patient impact for our device.”

“In actual ‘practice,’ we had to discover practical user needs on the fly in our cadaveric work with Dr. Meals,” Ally said. “We didn’t have any information on how this procedure or device would or should work in the operating room. The team, thanks again to GCMI and OXOS, was able to get Dr. Meals what he needed to perform the procedure as he thought best. We basically laid out the device and associated components on a tray and had the collective team intuit its use, and identify needed refinements through real application.

“We also learned what’s required for sterilization, a critical requirement for this device, thanks to the availability and training on GCMI’s onsite autoclave. Ultimately, we hope to see this device evolve from its current titanium composition to a bioresorbable material composition, which is an incredibly exciting prospect for all concerned.” 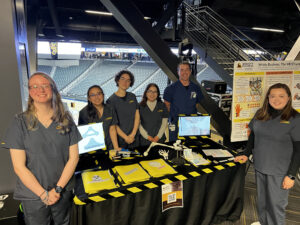 GCMI thanks Team Wristy Business for sharing their story with us and wishes them the best in their future endeavors: Gwyn in her co-op with Alcon, Adriana in her internship with OXOS Medical, Ally who graduates in May 2023, Elaina Horlander who has accepted a position with Epic and Mira Mutnick who has accepted a fellowship position with the Minnesota Twins.