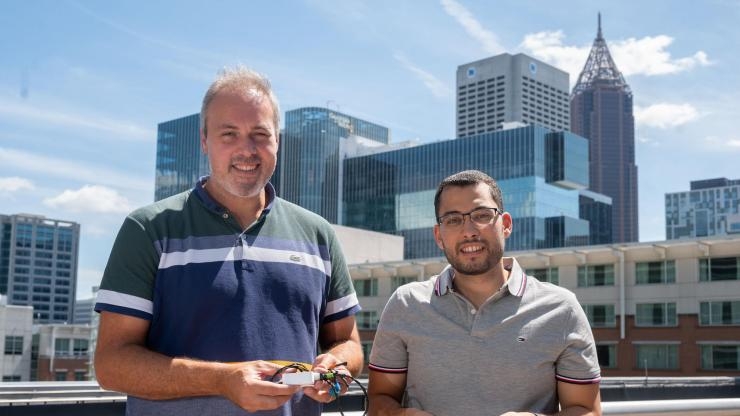 In 2014, a Children’s Healthcare of Atlanta nurse, Lynn Pogue, approached an engineer, Leanne West from Georgia Tech, to discuss the burden of IV monitoring. This is when Sherry Farrugia, the current Chief Executive Officer of GCMI, stepped in to help assemble the team that would begin the investigation into a new device capable of mitigating IV ‘infiltration’ or ‘leakage’ in pediatric patients.

After conducting their preclinical study at GCMI’s T3 Labs, Samer Mabrouk, a postdoctoral scholar at Georgia Tech, and Omer Inan, Linda J. and Mark C. Smith Chair and associate professor in the School of Electrical and Computer Engineering at Georgia Tech, determined that their primary method for this device would be measuring changes in bioimpedance. They then developed the prototype for the study and progressed to human testing. 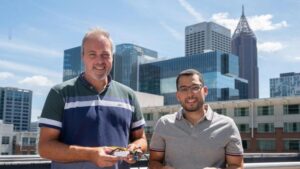 A recent article from Georgia Tech Research Horizons spotlights the new biomedical safety device developed by Mabrouk, Inan, a team of clinicians and nurses from Children’s Healthcare of Atlanta Egleston Hospital with support from GCMI. According to the article, “This device monitors for important safety issues that can occur during intravenous (IV) therapy, the process of delivering liquids or medicines through a needle directly into a patient’s veins.”

“After an IV needle has been inserted into a vein, there are various factors that can cause it to leak, either just beneath the skin or even deeper, into surrounding tissues. This painful process of unintended leakage is called infiltration. In a related process called extravasation, the leakage of certain medicines like chemotherapeutic drugs directly causes tissue damage. Nurses are trained to catch these events before harm occurs, but mild cases of clinically insignificant infiltration are thought to happen with surprising frequency, at rates ranging from 23 to 87% in children.

Mabrouk and Inan worked with Patrick Strane, an engineer at GCMI, to figure out how to prepare the device for human testing. After analyzing the device, they decided to make improvements to its packaging, which made it safer for children and more resilient to stringent hospital cleaning standards.

The current setup of the device is a set of four electrodes connected to an iPod-sized electronics hub. A doctor or nurse places two of these electrodes above the IV site on the arm and two below. The hub contains the computing hardware and sensor circuitry that delivers and processes the bioimpedance signal.”

Currently, this team of researchers is collaborating with GCMI to move to the next development phase: a formal clinical trial to support their application for FDA 510k clearance. If the clinical trial is successful and they are able to obtain clearance, the team plans to commercialize their device for extensive use in clinical practice to combat bioimpedance in IV monitoring on a much broader scale.