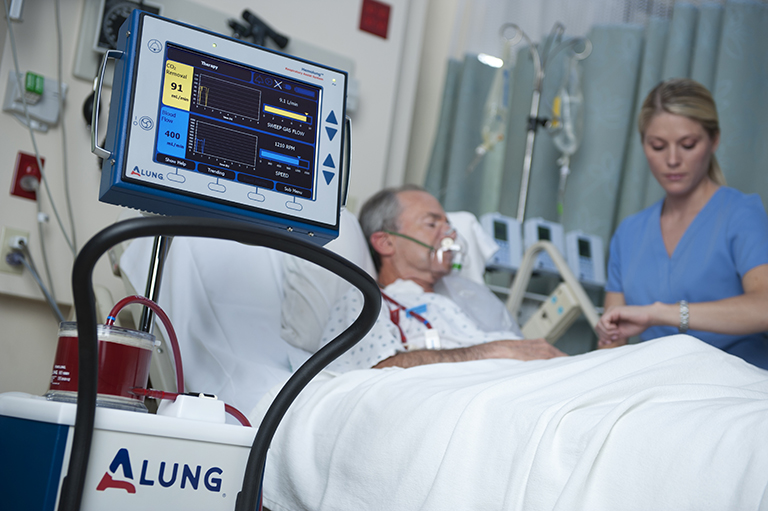 ALung Technologies needed a CRO with great flexibility and responsiveness in order to maximize limited resources and accelerate the timeline associated with preclinical trials.

“T3’s recommendation has accelerated our product refinement testing and preclinical trials saving ALung time and money at every step along the way.” – Jeremy Kimmel, PhD Director of New Technology for ALung Technologies

The Hemolung RAS (Respiratory Assist System) is the world’s first fully-integrated system for Respiratory Dialysis, a simple approach to extracorporeal CO2 removal (ECCO2R). The system removes carbon dioxide directly from the blood, mitigating the deleterious effects from mechanical ventilation and allowing the patient’s lungs to rest and heal. Applications of the Hemolung RAS include avoidance of intubation and invasive mechanical ventilation, and facilitation of protective ventilation. The Hemolung RAS was designed from the ground up with one thing in mind: simple, safe, and effective extracorporeal CO2 removal.

In short, the Hemolung RAS supports patients in acute respiratory failure due to conditions such as COPD, now the #3 killer in the United States behind heart disease and cancer, and ARDS (Acute Respiratory Distress Syndrome). The device supports respiratory function for up to 7 days of use in the intensive care unit until the patient’s respiratory status has stabilized.

The Hemolung RAS achieved its CE mark in 2013 permitting sales throughout the European Union. It is now approved in 34 countries worldwide and has been used to treat more than 450 patients. 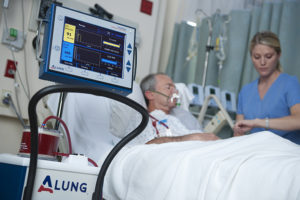 Now the time has come for ALung to pursue its FDA regulatory approval for commercialization of the Hemolung RAS in the U.S. Recently, the Hemolung was approved for the FDA’s Expedited Access Pathway (EAP) program, which seeks to accelerate approval of ground-breaking medical technologies in the U.S. market.

“Once the Hemolung RAS entered operation in the EU, we knew we needed a preclinical facility in line with our budget and timeline that would help us sharpen our preclinical protocol,” said Jeremy Kimmel, PhD Director of New Technology for ALung Technologies. “We have to ensure that when we go for our GLP study required for FDA approval we have done all we can to acquire that approval swiftly.”

What to do when medtech innovation “outgrows” the academic space

Early, non-GLP studies for the Hemolung RAS were performed in an academic setting. The institutional administrative requirements for these studies, including IACUC, did not move swiftly enough for ALung. As a small medical device company, it needed a CRO with great flexibility and responsiveness in order to maximize limited resources and accelerate the timeline associated with preclinical trials. It also needed assurance of confidentiality. An industry colleague at the CEO level recommended T3 Labs for preclinical trials. ALung and T3 Labs initiated the first of four preclinical studies in 2013.

A better model – “T3’s recommendation has accelerated our product refinement testing and preclinical trials saving ALung time and money at every step along the way.”

“All of ALung’s CE-mark submissions were based on sheep studies,” said T3 Labs  Deepal Panchal, Program Director for Testing. “Sheep are notoriously difficult to manage. So we consulted with the ALung team and advised they shift the model to more docile, compliant and physiologically appropriate calves.”

“Having a reliable animal model is one of the most important things to have under your belt before going to the FDA,” Kimmel said. “T3’s recommendation for the model shift based on their experience and expertise was much more practical for this application based on our device’s capabilities and needs. I am convinced this recommendation has accelerated our product refinement testing and preclinical trials saving ALung time and money at every step along the way.” 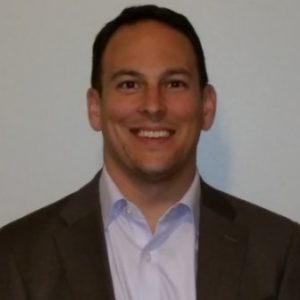 A partner for preclinical trials committed to learning, teeing up GLP success and building for the future

Both Kimmel and Panchal insist in the value of flexibility, collaboration and collective learning in order to advance the causes of all concerned. For ALung and T3 Labs, this manifested in:

When trying new protocols or device elements, medtech innovators need to know that the CRO is going to maximize their testing investment. Engaging experts who are flexible, communicative and interested in the science for the sake of science itself and learning in general improve the efficiencies of subsequent studies and make the most efficient use of resources for preclinical trials.

According to Kimmel, anticoagulation administration has been the most challenging aspect of development, logistically and scientifically, for the Hemolung RAS. “How we anticoagulate these animals has a large impact on how the device runs,” Kimmel said. “Through our work with T3, we are confident that we have solved the issue. Through smart trial and error, we have gone from inconsistent initial outcomes to a position of confidence that we have determined the best protocol to use.”

Getting to a GLP dry-run without breaking the bank

“Through more than four years of development, we believe that we have given ourselves the best chance for preclinical success and regulatory approval while working with a budget that looks like pennies compared to the Medtronics of the world,” Kimmel said. “We don’t have a large engineering and preclinical team. We don’t have limitless resources for repeating studies to perfection. We have a few engineers who are new to complex animal studies.

“There isn’t often a ‘Eureka!’ moment in medical device innovation. It’s an iterative, collective process where everyone learns something that contributes new knowledge and high value to the ongoing product development at every step.”

“Our fourth test with T3 was essentially a dry run for GLP. Thanks to their experience, flexibility and commitment to learning, we are confident we are ready for GLP and regulatory submission.” 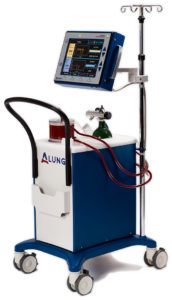 When ALung wanted to try some new blood testing assays that T3 hadn’t done before, they set Dr. Kimmel up in one of their labs. Deepal helped set up the protocol and developed on her own a new blood sampling technique. She accepted the challenge ALung presented and said, ‘We’ll figure out a way to get it done.’ And they did.

“This kind of cooperation creates a relationship that matches our company’s values and serves as a cornerstone for our ongoing innovation,” Kimmel said. “We are building capacity and partnerships for the long-term. If another preclinical CRO came in and said we can beat T3’s price, we would decline due to the value of having developed effective protocols together and the consistency we have generated that sets us up for long-term success.”

If you are seeking a trusted partner for preclinical studies, talk to T3.

ALung’s Hemolung RAS received the 2014 Medical Design Excellence Award for Critical-Care and Emergency Medicine. Its GLP study is slated to begin in March and Jeremy anticipates submitting an IDE application to the FDA in Q2 2016. Its U.S. clinical trials could start as early as 2017. If your medical device company is seeking a flexible, reliable, innovative partner committed to learning and maximizing your investment in preclinical trials, contact info@t3labs.org or call (404)894-5227.